A Woman’s Experience With Mesothelioma

Inez St. John thought she was in perfect health, until one day in November 2018.

“I was at my daughter’s house, and I ran up the stairs, and I couldn’t breathe,” she says. “I thought I had bronchitis, and I asked them to drop me off a medical clinic.”

The clinic was in Pell City, Alabama, just a short drive from her home in Ragland. It didn’t take long for doctors to determine this wasn’t a simple case of bronchitis and send her to a larger medical facility.

Emergency room doctors at Grandview Medical Center in Birmingham took a series of X-rays and immediately recommended Inez see a pulmonologist — a doctor who specializes in treating lung disease. The first step: removing the excess fluid from her right lung.

“It wasn’t really bad,” she says. “The just sat me on the table and bent me over and put a tube in my back and pulled it out.”

The procedure itself wasn’t painful, but Inez still wasn’t sure what was wrong. A few minutes later, the doctor came back into the room.

“He asked me, ‘have you ever been exposed to asbestos?’” she recalls. “And I said, ‘yes, I washed my husband’s clothes. He worked at a plant that made asbestos pipe.’ And he said, ‘okay.’” 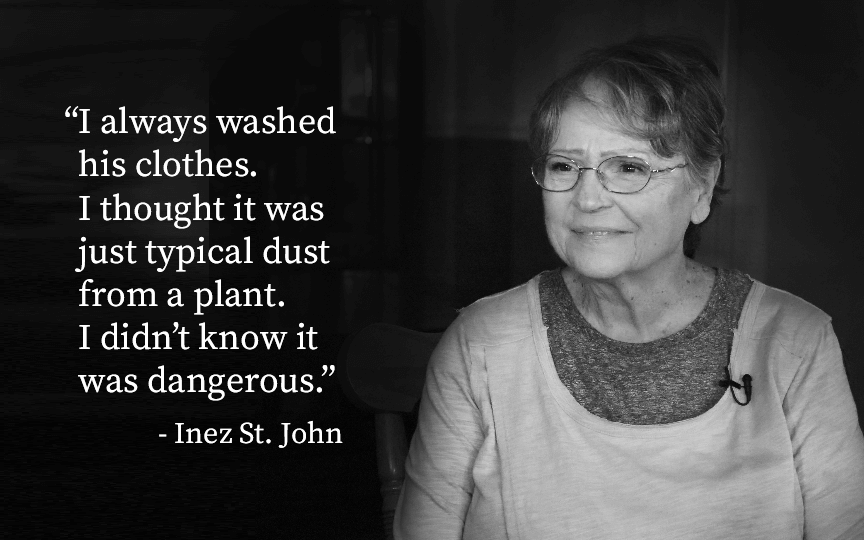 The pulmonologist ordered a biopsy, and a short time later, Inez received her diagnosis: malignant pleural mesothelioma, a rare cancer that affects the lining of the lungs, called the pleura.

More than a decade of indirect exposure

For 14 years, Billy Ray St. John worked various jobs on the line at Cement Asbestos Products Company, also known as Capco Pipe. Looking back, he remembers the clouds of dust.

“A lot of times we’d catch it with our hands if we could,” Billy Ray says.

Workers at the plant manufactured large water pipes that were shipped across the country. The combination of cement and asbestos created a product that was strong, fire-resistant, and durable. It also meant the employees at the factory inhaled toxic asbestos dust every day they worked on the line. The microscopic fibers clung to Billy Ray’s clothing and shoes. “It looked like you had flour on your clothes,” he says. “It would be real dusty with that flour, and it was on my shirts.”

His wife was in charge of the laundry. Even though she didn’t work in the plant, Inez was constantly inhaling the carcinogenic asbestos dust, in a process known as secondary or ‘indirect’ exposure. Microscopic asbestos fibers stick to clothing, skin, or hair and often end up embedded in the carpet and furniture. Developing mesothelioma this way is rare and occurs more often in women than in men.

“I always took care of the clothes,” she says. “I even cleaned his shoes, because of tracking in and out, you know? I always washed his clothes. I thought it was just typical dust from a plant. I didn’t know it was dangerous.”

Her husband, who is four years older, sees a lung specialist at least once a year. Despite more than a decade of working with asbestos, Billy Ray doesn’t have any signs of cancer.

“It shocked me because we would have thought that I would have got it before she did because I was in it,” he says. “She was just washing my clothing.”

Capco shut down the pipe plant in 1983. Today, only a large metal fence remains, encircling the land where the factory once stood. Visitors or residents can take a short walk or drive down a narrow asphalt road next to the empty lot, now dotted with signs that read, “Caution: Asbestos Waste Disposal Site.”

Residents describe Ragland as a small town where everyone knows everyone and everything. But the plant was open for nearly two decades, and workers never saw those signs or heard that warning. They never knew anything about lung cancer or mesothelioma. Now, years later, the St. John family knows the danger all too well.

“Two or three of my cousins, they worked here, and they got sick, and they died,” Billy Ray says.

“I know at one point, one of our friends was number 40,” Inez says. “And after that, there’s been a lot more. And a lot of them were friends we played cards with. We were all close to them.”

Inez receives chemotherapy every three weeks. The treatment is a combination of carboplatin and pemetrexed, two drugs commonly used on mesothelioma patients.

The first chemotherapy treatment caused her white blood cells to dip dangerously low and kept her in the hospital for several days, she says. Doctors solved that problem with what Inez calls ‘a patch’.

“It doesn’t smell right,” she says. “I’ll smell something and have to run to the other part of the house and open a window.”

Luckily, her family is there to help with cooking, cleaning, and basic household chores.

“They’ve been fantastic,” she says. “My husband is fantastic. They’ll do anything for me. Everything. And I’ve always been the one who’s independent. I just want to do it all myself.”